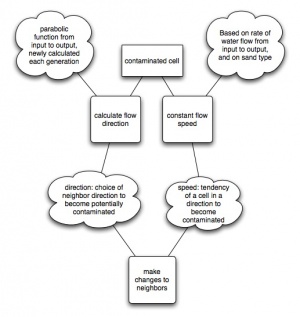 Our goal is an incremental approach towards illustrating groundwater contamination in a confined aquifer. The confined aquifer, viewed between wells 1 and 8, offers an environment within the groundwater simulator with the fewest variables. The first 4 experiments are an effort to illustrate the behavior and underlying science that must be understood and demonstrated in the final experiment.

We did three complete runs, each with a different dye colors. We used blue, purple and green because we thought they would give the most contrast between the dye and sand.

Each image was adjusted to fix lens distortion, cropped and had its colors inverted for higher contrast. A ruler was added and the webcam's timestamp was preserved. The image processing was done via batch jobs in Photoshop.

The batch actions are as follows:

Many of these processes could be replicated through the freely available, command-line driven program ImageMagick. The inversion, cropping, rotation and merging of photo files are well within IM's scope. The distorting and cropping are very specific to the position of the camera in relation to the groundwater simulator and would need to be adjusted each time the camera was moved. If this was to be a regular occurrence, it may be beneficial to have a flat piece of cardboard with a grid on it that could be placed directly in front of the simulator. A photo of this would give a reference for the distortion caused by the camera's lens in its given location.

The movies were created with Quicktime Pro's "open image sequence". QT does not appear to have the capability to have custom framerates outside of their standard choices. This means that the actual simulation and the movie of the simulation run at different speeds.