Computer Science became a program with a relatively regular set of course offerings and a defined major in the late 1980s. Faculty from a broad range of departments taught courses along with alums from the area, e.g. Ray Ontko. Ray had taught CS previously when he was working in computing services.

In the winter of 1993 Charlie was due for a sabbatical from his software engineering job at Sybase (Sybase is headquartered near Berkeley, CA, Charlie worked from his home which is South of Richmond). At the same time Earlham needed someone to teach our CS2 course (the first course for potential majors) during the winter term. For the next couple of years Charlie continued to teach a course or so each term and began to work with the first applied computer science group, the System and Network Administrators. Charlie also took on the job of coordinating the Computer Science program. 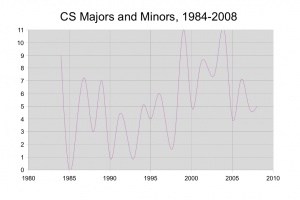 The following charts both numbers and moving average but doesn't include minors. If we are going to chart minors we should do them separately from majors. In any case we need to give both counts and average---the moving average has no meaning in the first four years. 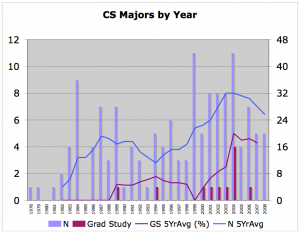 In the late 1990's Computer Science was an integral part of the proposal to the Lilly Foundation that ultimately provided a significant chunk of the funds to renovate the science complex. We have also played a role, albeit fairly minor, in all three of the HHMI proposals. Computer Science is an integral part of the most recent Keck proposal, working on both field data collection units and curriculum module development. Some of Charlie's on-campus work, and the bulk of his off-campus work, is supported by grants from the National Science Foundation, National Endowment for the Humanities, and the Department of Energy. He and his students play a small part in those grants.